In this section, you may see time in a new perspective. Let’s start with a few easy mind-stretching exercises that will slowly introduce you to Psychological Time. Also known as Internal Time.
Then we’ll head deeper into time. 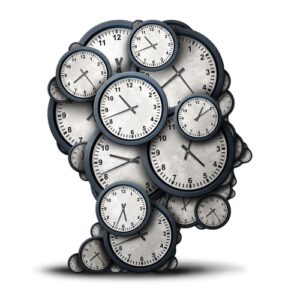 Psychological Time in a broad sense describes ANY mental pressures that are processing in my mind from either the memories I hold of Yesterday or whatever refinements that I produce of Tomorrow.

Simply put, it’s my conscious activity. It’s a line of time or timeline of events which are the behind or potentially ahead scenes, regardless of my polarity charge.

I can also refine my ideas to appear so that I perceive the ‘present’ in an illusion.

Often, these hypnotic and blissful feelings trick me into thinking that I’m actually present or in the ‘now’. When in fact, I have created an artificial space made in time.

Yesterday + Tomorrow + the idea of the Present/Now (which is actually a tricky refinement) ALL equals = Psychological Time.

I know it sounds odd at first, but check it out for yourself.

Nowadays, I like knowing that I have minimised any tricks I’m involved in since they take my energy and create byproducts!

Although, when Psychological Time is implied in a general speaking sense on this website, aka the Default Time, it points to a negative. Please hear me out. A build-up of pressure makes the time on the clock on the wall feel more noticeable than usual. Oh yeah, and from a solid lifetime of personal frustrations which led to a mindless website!

But technically and broadly speaking, Psychological Time includes all of my thoughts as any pressure can be expressed thru either a positive or negative charge.

Ok, let’s take a moment before we give our MIND TIME MUSCLE another good stretch.

Moving beyond the broad sense and with an increase of either pleasure or fear inside my thinking on the frontline (I now move into the least-implied sense OR generally-implied sense, respectively), my attention is controlled by this strong magnetic presence.

<The Least-Implied Sense – Aka the Positive Side of Time>

On the one end of life, I’m magnificently LOST in the awayness from that evil Default Time that caused significant tension.

While on the opposite end of Psychological Time…

<The Generally-Implied Sense – Aka the Negative Side of Time>

On the other end of life, I’m undesirably STUCK to time. I’m anxious.

It doesn’t get any simpler!

In another life, I used to escape my problems all the time which made the positive the ‘generally-implied’ label. But that soon changed after a MASSIVE surprise from loading up the negative over the long term! Thankfully, I have now flattened the curve.

All up, I learnt that if I jump from a dark, cramped space straight over to the light using a ritual or an escape without fixing the root of my problem, it means I have rerouted my energy into positive sensation and put the negative on hold (only for it to incubate).

Back in the day, I would always suppress my negative perception with something pleasantly overriding.

Psychological Time in My World

Now, let’s put everything above against another version of time that everyone will know.

Yes, so there is another class of time worth noting that everyone already knows ⏲. Or perhaps, most will only know.

Time can also revert to its traditional meaning of calendar, planetary or chronological time ⌚ within my language towards people. We were all raised alongside this type, so it will be easy to understand. In contrast to the Internal/Psychological Time aspect, let’s now call this typical life-known version… Calendar Time; aka External, Shared, Outer or Physical Time. (Time obviously isn’t physical, but you get the gist of it…)

Shared Time is a collective measure, and I need to be a part of this process to work with the outside world.

Whereas, Psychological Time is my thinking on an emotional plane. Yesterday and Tomorrow reproduce feelings that often fluctuate my perception of calendar time.

Shared or Collective (Calendar) Time is a measure that syncs my physical behaviour with people, things, objects and materials. My movements and activities require an interval with the outside world. Otherwise, my relationship with you, everyone and everything else will suffer. Therefore my health also suffers.

Great! Now that you have broadened your perspective on time (unless you already saw it this way) let’s explore more time systems — subsystems and variants.

Previous | Home | Time | Next: Overthinking – the Fog of Time