On top of everything covered on Less, just as important is another aspect that makes up this space, something that affects my everyday life but hardly anyone recognises or is even aware of. At least, at the deeper level.

There are two types of people walking this planet, and they are on very different paths. One holds a Highly Sensitive Mind and the other a General Mind. It’s annoying because we live close by in reality, but are miles apart upstairs.

In addition to the Lessing (if we can play with the maths for a moment), I’m now attempting to blend an Unconventional Mind or the Odd 1 in 10 Highly Sensitive Person, in with the Conventional Mind or the other Common 9 Run of the Mill Folk. Also, these other 9 are known as the ‘Herd’ around here, a term that is not intended to belittle, rather it is meant to respectfully imply sheer numbers in the one direction.

Since I hold weird experience in tunnelling through and escaping the seemingly inescapable bunny holes, it means it is somewhat easier to now pull a rabbit or two from my once dusty and old, but thankfully refurbished hat.

I have been given a greater challenge and won’t stop until I get the job done as there is a divide that needs to be dealt with or at least seen. The issue is one group of people work better in life using traditional methods, while others find flow in a reverse or backwards way — Level 2 backwards, and not the typical Level 1 forward movement made for the majority of people.

Otherwise, a pain in the butt occurs when someone tries to jam a square peg into a round hole which we all know won’t work.

So, boys and girls… It’s time we bridge that gap. 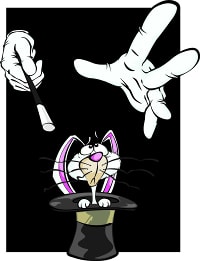