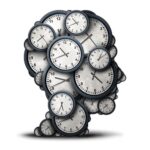 Understanding Psychological Time & Space as an inward-only measure exposes a unique quality in life, and I urge everyone to observe how this phenomenon works.

When I speak of Time in a broad and technical sense, it means I’m either thinking behind or in front of the present reality for however long or short the interval is. For instance, it could be seconds, hours, days, years, ‘ago’ or ‘ahead’ of the now. It’s any information along the timeline that is at the surface of my mind. In contrast, when the present reality is fully active, neither time nor thought (which are the same) is dominant.

Forget the outer clock on the wall for a moment and look at the two ways along the inner timeline: Yesterday ↔ Tomorrow.

First, I recall a memory projection from my original record. Second, I imagine a future projection by refining aspects of the past.

All up, both ways get projected when I’m thinking. I see a Memory Projection (Yesterday) or Future Projection (Tomorrow). Whether my thoughts have any chance of realising in the outer world or not, I still call the potential, change or refinement of thought ‘Tomorrow’ as it represents an unborn event in reality.

My general sense of Time was redefined after a lifetime of being impacted by negative emotions. As my experiences left an unwelcome imprint or heavier footprint, Time was frowned upon. Even though personal experiences and the emotions they produce are a two way street, I still see Time as being a pain in the butt more so than a blessing. If you see Time otherwise, as a treat, you’ve had better impressions than mine. Although, my perception of Time is shifting again to a more positive side (or at least to a less negative side).

The technical or broader sense of Time is easy to explain. It points to any thoughts at the surface of one’s mind, negatively-charged or positively-charged.

Time in a Nutshell

My haunts of yesterday and any worry of tomorrow are condensed thoughts that increase pressure. And whenever heavier processes are running, I move further away from the present moment. Active reality becomes lost in this annoying invisible weight called Time.

However, Time can also produce lighter sensations in Positive Time (the floaty/spatial appealing energy), which has the same effect as its negative counterpart, taking my attention OFF the present. In which case, I shift to the desired side of the unreality field which is a place we all want to live. Not only that, but in my illusion, I sometimes call this place the ‘present reality’ when it’s absolutely not.

Under the old paradigm I was attached to the positive side of my timeline. By staying away from the negative side, I gained a false sense of being present.

Unfortunately, when reality packed the weight back on, I would repeat the same pattern all over again. I would get weightless and would fly off with the fairies which seeded even more problems for the road ahead. This is the problem with Time and not correctly defining and understanding the ‘present reality’ setting.

So after many years of living the up and down lifestyle (backwards and forwards between yesterday and tomorrow), I finally learned a stronger way of operating within the world of Time, which kept me closer to the ground.

‘In front’ or ‘tomorrow’ is an illusion. It is always my memories modified into a projection. ‘In-front’ is actually ‘behind’ after being photoshopped many times.

Think of an event about to occur and ask yourself to locate the source of the objects contained in the images projected.

Because when I do, all these components, colours and shapes originate from Yesterday and I used a wand or tool to mix them up. They sometimes might appear unique, but as I zoom-in close, their true origins become clear. Essentially, any vision we have of Tomorrow is usually little more than a highly refined memory of Yesterday.

Still need more insight? There is a detailed section dedicated to Time at the very end of this site. It’s placed there because it does require a lot of priming.