The act of Mindlessing technically contains no conscious fixing. Instead, it allows a deeper function beyond thought to work over the long run when an overly-active/default mind gets detected. Simply put, I see an issue in my pressurised thinking and allow a release or less fixation, thus putting less emphasis on the juggling of my thoughts to correct or balance a story.

A ‘release’ of this deeper function is action from another level or dimension in the upper echelons of my mind. Although I may struggle explaining any more of its makeup, other than it being a ‘psychological defusing’ of sorts, it’s been my best self-help so far.

Otherwise, if I feel no heavier pressures, then the word Mindless simply doesn’t exist or won’t hold any power over me. It won’t stick to me and weigh me down. Nor will it require ongoing security and reinforcement like traditional beliefs that fluctuate my ego and overprotect my Altar.

Admittedly, I may still go to great lengths in each of my problem-stories by translating and expressing each personal drama in every possible angle, looking for a specific outcome that satisfies or compensates the situation. But now when I do, thus choosing the route of consciously fixing myself, I enter the traditional/mindful world at a reduced yet optimised rate because of my new discipline of psychological releasing/defusing.

Today, whenever the word Mindless pops up in my world, perhaps as I’m telling someone about it in a silly way, it carries little weight. The idea gets summarised and isn’t taken seriously, at least not in the way that causes added pressure. Instead, it’s a lightweight idea that’s fun to play with when passing it around in the community.

With this fresh insight having come to light, and the new updated core package installed, I’ll never abuse my Mindlessing code in a religious cult-like fashion since I finally get the bigger picture.

In fact, this is your Next Level Human Firmware Update as a stable download. So please, help yourself… It’s open-source. 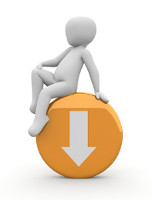 Mindless < The Default Pressurised Mind = Space or Room. This is an important breathing area that requires no Einstein-type brain. Mindless is basically a silent word, a breath between my thoughts.

Please also be aware of Mind ordering other thoughts around in disguise of letting go.

Next, once I have patched up and have successfully rerouted a percentage of my energy off the charge of positivity that I would normally use to stabilise my mind, I give greater power to the seeing where the REAL WORK is done, providing long term, meaningful results.

Undoubtedly, I still dabble in the positives because of the way I conditioned myself over the years. Also, I am a human who lives in the modern world which automatically means I come with ‘wanting way more’ installed (Why on Earth would I change to ‘less’ this far in, right?). Now put these two things together and I’m lucky to have come this far. I process far less than ever and gratefully live the improvement today.

That wasn’t so hard, was it?

Were you able to take a small perspective-turn from such a laughable, stupid word? Also, can you see how going Backwards can actually help some of us move forward in life? If so, please carry on to the next Intro section that covers my reactions from the panel of commentators.

Oh yeah, I’ve picked up a few friends and foes along the way. You’ll probably have the same group gathering upstairs as well. These guys are a diverse mix of up and down personalities who are now guiding me thru life.