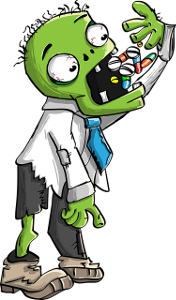 When a vulnerable host collects too many unwholesome programs throughout life, their system becomes heavy, and behaviour is affected.

At first, symptoms include increased chatter and self-centered activities due to sensory demands creeping up. But as the years progress, a loss of sensitivity shapes the psyche─ moderately to aggressively.

Following on, the organism starts decaying faster from declining intake choices as heavier fuels are used to supplement the lack of space in one’s life. For example, my skin gets leathery, and I lose colour from booze, drugs, malnutrition, etc.

Next, cover-up applications and quick fixes that usually come at an even higher cost down the track (endless cosmetic surgery, Botox, fat burners, steroids and supplementation), are also exploited in a mutual arrangement. It is super hard to rollback because the sensations delivered from the short-term visual rewards (which get viewed very differently from a clearer perspective) produce a feeling or surge of youthfulness, power, and strength. Even to the point of invincibility.

Once you allow a Zombie or two to enter your sphere of influence, it is easy to be infected by them. They can enter through your front door up close, or through news feeds from afar. In which case, you then become a slave to what you thought was going to be your salvation. Not only do they contaminate your own system, but soon you may also start indulging in overpriced products by companies who exploit animals and leave a heavier footprint on the world. This is the nature of Zombyism.

Mindspam, which carries the Zombie psychological virus across the airwaves, fragments a mind and creates double/triple lives. Once infected, the host thrives off inflating ideals that demand a more significant response or behaviour from their surroundings, implying exploitation of emotional, sexual, and physical energy from others. So, beware! These infected hosts are drainers… energy zappers who often start off sugary (very briefly), but become sour in the end.

Living with mindspam means Ideals speak much louder than Acts.

« Previous Part
📁
Next (Main) »
Like what you’ve installed on your psyche so far? Are you enjoying Mindless 2.0 Philosophy? With your help, we can turn the world Mindless one mind at a time.