Similar thoughts affect people differently, which means it’s all a matter of perspective.

For example, when I have an experience in life, the relative memories that arise and hit the spot for me (delivering pleasure or fear) might not do so for others, who share less sensation during the same or equivalent type of encounter. The difference being that the interpretation of the present is based on vastly different past exposures. Thus, my previous experiences, and the knowledge I’ve understood and accumulated from them, all go towards the way I react to the new ones that I face.

Therefore, if I do not want fear continuing its undesirable grip as a dense range of neurons firing-off upstairs, then it’s a good idea I at least understand these packets in better detail. Packets, signals, cells, or whatever anyone wants to call these feelings that shoot across my nervous system over a bunch of images, are the things that in most cases exaggerate situations in everyday life.

Is the Threat Ahead Real?

Here’s a straightforward scenario that could happen to anyone:

I caused a commotion when I saw a snake, stirring him up. But my friend, casually but carefully, backed off a bit and walked around him.

Fortunately for my mate, he was able to recognise that the snake was in fact not dangerous. Whereas I wasn’t sure (unclear image), and immediately tapped into my prejudice against all snakes, largely due to a lack of knowledge and previous experience. Plus, from all the ‘snakes = death’ programming I’ve taken in over the years.

In this scenario, I obviously would’ve preferred being the one carrying less fear. Not only did my friend recognise features from detailed knowledge deeming the little guy as harmless, but he’d also made previous contact with several snakes in a controlled environment. That is, he was slowly introduced by someone else who carried experience from another person who was a snake-handler, and so on.

So now, when greeting similar snakes, my mate holds less weight. The chemical reaction no longer hits his fear centre with such intensity, while I run up a tree instead.

By clearly seeing that I was lacking clarity on perceived dangers that didn’t pose any real threat, as my cross-referencing couldn’t determine the fact of the matter as purely innocent (and that the snake was more scared of us with good reason), I get envious while being confronted with two clear options:

Dealing With a Perceived Threat

Yet the idea of snakes is just one of countless scary thoughts and possibilities! How do I tend to them all? 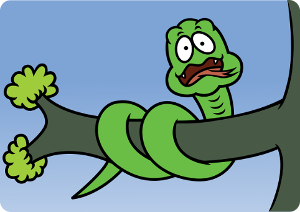 The Moral of the Story…

It’s in my best interest to take a practical approach towards fear when it presents itself. Otherwise, I’ll compound my condition and allow superficial images to rule my world since I cannot differentiate them from an actual threat. Upon each interpretation, I’ll increasingly jump out of my skin in response to a conclusion that doesn’t match the real scene.

So really, there’s only one clear choice ahead. And that is to face my fears instead.

Next, I’ll show you the structure of my thoughts a little deeper.