Instead of trying to resolve the inner turmoil caused by these unreal versions of people in my past, I now can’t help but closely examine each fixer on my panel as they pop up. From watching the entire show unravel, I have released my fixation on fixing them.

So yeah, I used to try and fix everything about me. But not anymore, or at least not in the traditional sense. Once truly realising that the fixers were broken, and they couldn’t fix a flat tyre when all the loud-mouthing started, that’s when the real help arrived in my life. Besides using basic common sense when needed (which admittedly did come from the panel), I began to take the backseat approach. This was especially true for the more complicated processes that involved overthinking, like when things heated up really fast.

In essence, I knew that a little space away from all the chatter had to be my best bet, regardless of however magnetic or promising my panel’s strength was or had claimed to be. Surely, a silence would deliver the least problems out of all options in front, especially after considering my odd mind type and its greater sensitivity.

Or, I would now move any way, except in the direction I had always taken within the status quo, by simply not continuing my usual shenanigans and saving my psychological power instead.

Yet most of my issues probably weren’t too complex to begin with. But for some reason, I made them that way by chattering on and on and on, eventually moving my ideas off-topic in this self-created pitfall. This is when my inner constructive talk soon turned to smack talk.

I fell in love with and became addicted to… complicating the life out of simple. 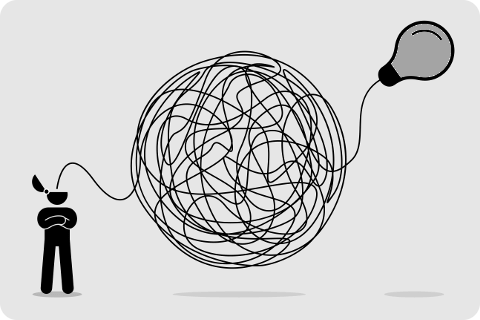 Given all these points today, I finally see and understand how I had rationalised heavier and heavier mental idling over the years, if that makes sense. It comes down to two basic facts:

First, I’m conditioned to move a certain way due to both my good and bad traits that I picked up from the acquired influences.

Second, my nature also drives in its own way from the built-in bits.

As a result of seeing both operate, I try to keep everything together and tamed in a close trajectory. However, when I was without insight into this structure, there was a sluggish byproduct because of all the energy spent on going different ways.

Red is red, while blue will get me through. So I now have God to thank that I’ve let go of the conventional method and allowed a new, cleaner merging of the two separate movements: the acquired and built-in blend of influences that run my world.

Perhaps something is built-in at the roots, DNA, or nature, far beyond my comprehension that helps everything eventually fall into place. But today I see it’s only when I get out of the way or off the panel that my greatest strength begins to unfold.

Four parts done and one more to go…