My Beliefs, Your Beliefs, in a Sensation-Driven Reality 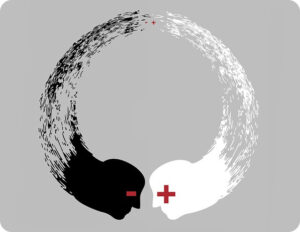 To suggest disbelief is any less significant than belief, or the other way around, would be foolish. Any act of counter-belief pressing on my senses also affects me just as much as pro-belief. All I’ve done is reversed the direction of an overwhelming feeling that is a part of the same pendulum, if that makes sense. Therefore, in these swings, I build up my superior non-believing feelings on the one side, which means I now look down on you, the firm believer who is apparently the only one stuck in dirty dogma.

When my general day-to-day mental processing is highly refined (regardless of the belief system I hold onto — ‘I don’t believe’ is also a belief system), I live in a Sensation-Driven Reality. My life revolves around the sweet and sour stories that I’ve picked up from my environment and carried along as a part of my new identity. Belief is not only boxed into religions and philosophies, etc., as I once knew it to be. The word now covers any area of thought that produces strong emotions or feelings out of a sense of meaning in a way of life, so to speak. This includes my worship of science and technology as the Almighty God of gods of this world. There is something in all of us that needs this type of attention.

But from what I know in the traditional sense, belief instead points to an old roll of immortal stories (stories of immortality) in an attempt to reinforce an ancient concept of life as fact (allegedly). These records of allegations that made it thru the ages produce a sense of security, comfort and longevity in someone’s overall pleasure centre.

In short, memories from the upline got handed down with refinements made each step of the way. This church broke into two parts, and those churches then split into more down the pipe. Why? Because of an endless power struggle, of course. Ultimately, religion and tradition kept the order, and the people within each group maintained a particular way and behaviour for as long as they could, thus keeping the wheels of their reality well-oiled until another shake-up would take place in that world of power gripping.

Faith. Built into people are these longings for wanting to be more than what we are by looking for greater guidance, thus implying a connectedness to forces outside the body. However, some of us seem to experience this longing more so than others, and we look for more patterns and symmetry between the inner and outer worlds to expose a stronger link in order to fulfil ourselves.

In terms of religion applied to the masses, a powerful satisfaction gets drawn out of a strong-body of ideals transmitted by the generations before us. Our upline knew which buttons to press to keep it all flowing as nicely as possible.

What sort of satisfaction comes from religious ideals?

Describing Heaven or some sort of fruitful thing; i.e., an existence with less physical labour and more space and energy to indulge, and inserting myself in the middle of the picture, is to inflate my reality into more than what it is. I envision a leading role in a desirable movie that I aim for in this life, thus hoping to cash in at the end of my reality when I finally become more than what I am in the next world. In other words, if there’s any inner experiencer left beyond death, if there’s a reconstitution or reanimation of sorts, I want to have a greater choice in the matter of what goes on.

At the right dose, believing helps my world go round.

What Else Could ‘Faith’ Be?

What could it be? Other than an immense feeling of desired symmetry between the inner and outer worlds?

Perhaps this ‘faith’ business I still often taste and hold onto is nothing more than my attachment to the idea of a life guided towards abundant energy and luxurious space by dissolving the unwanted things in between, including certain types of people. In other words, I aim to get more energy and space than I have right now by following the generational transmissions on their interpretation of ‘good cause’ which is apparently fuel for safe passage to this place called Heaven.

I am guided to the fruits by something greater than myself, says my idea which has captured my faith.

Or put another way, whenever a hint of faith arose, I’d jump at it holding onto the responding thoughts, converting as much psychological reward as possible. Because once the ideas kick-off in my mind, they’re gratifying, regardless of what’s actually ahead or about to occur.

Well, at least until the sour thoughts takeover and the ‘forgotten sweet’ has to restart inside the mind’s incubation chamber again. That’s basically how I see the process today.