To keep things simple and sound and to not drift further into the world of out-thereness, which I love to do at times, I’ve now broken down the Human Mind-Brain Combo into two types of people that cover this planet. And yes, I understand there is a big book telling a story and categorising many different behaviours and traits into reasons and labels, etc. But I’m stepping back into the parent directory and dealing with the one broader, more relatable scope.

Conventions and the finer details can stick to the professionals or to those minds who are better equipped to know these ‘ins’ and ‘outs’.

Our two classes divide into the Majority & Minority.

Every so often nature slaps the current arrangement with a sizeable challenge and it produces a Highly Sensitive Person who struggles with basic black and white integration as their mind gets overwhelmed. On the other hand, they naturally pick up and potentially translate information from a Greater Range or Broader Field of Reality that would otherwise go unseen or unfelt by the majority class.

The Broader Field in a nutshell…

The broader field is a less visible spectrum or less noticeable wavelength permeating throughout existence. Perhaps comparing meta-information or ‘information about information’ to this is the way to go about it. Most people only focus on a thing or piece of information directly in front of them, whereas a few of us can’t help but sense beyond the thing or piece of information that is in plain sight, until the experience makes greater sense. Thus, we go a level or two beyond the object and any expectation that an experience may bring us. Many cultures label people who are successful in translating things beyond sight a ‘Medium’, but it usually comes with a lot of stigma about dead people who live on. And I’m not talking about that here. If anything, a ‘Medium’ is simply a bridge between sensory systems aligned differently.

In an untamed space earlier in my life, my behaviour often got weighed down by an addiction ultimately caused by background noise, which we’ll also refer to as ‘static’, or the two or so levels of information beyond that isn’t translating properly into a clear message. You see, when your mind is sensitive, it’s very easy to latch on to stimulating thoughts and fall into a distractive habit, as a way to remedy any internal overload causing stress. It’s difficult to learn and pickup wholesome patterns from the broader field when attentive energy is always being consumed by one thing or another. Thus, the background eventually overtakes the foreground while the foreground slips into the background, and a destructive narrative gains ground from stimulating or controlling thoughts.

All up, this oversensitivity both limited my options in life AND placed a higher demand on the surrounding Herd. This is why a Mindware Update like this could help others in the same way it has with me.

Today, I see the Brain and Mind as one complex. But if I were to break it down, the brain is the physical manifestation and the mind is the multidimensional aspect. In this way, non-physical information layers in with the physical side, and vice versa.

Science says that the brain creates consciousness. While Religion and Spirituality say the opposite. But I’m not fussed either way, so long as my surface contents get emptied at the start and end of each day. And that 90% of anything else can also get dumped during the day. I truly love living the emptied Mindless way. 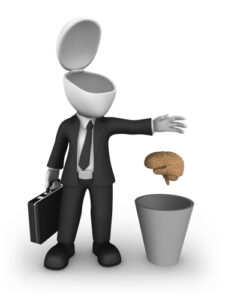