I came into this world not only physically long-sighted, but mentally long-sighted and miles from everyone else. But this unique perspective, with its strange challenges, also had its perks. Soon, I learnt that I could overcome my mental distance hurdle by taking shortcuts in life, or by finding weaknesses in other people’s minds to exploit. By observing the traits of those around me, I would eventually adapt to them in order to navigate my way through life the easy way. This allowed me to get around the community more freely and access sensitive information to compensate for the boring conventional information force-fed to me.

Although I ‘kind of’ wanted these bonafide or traditional rewards like others my age, they weren’t on my priority list because of their at most average appeal that barely hit the spot. Instead, there were always these tastier ones hovering further in front. Over the horizon was where I knew that the good stuff was kept. So naturally, from this day forward, my sneaky goals and my will in life were set.

Growing up with a funny combination of secret desires and various obstacles, I would always land at the same crossroads. My arsenal of supercharged ideas that fired back and forth nonstop, meant I’d lack the drive or will needed to push the average/imposed ones through. That is, all the boring conventional tasks set by parents, teachers and peers that apparently had to get done.

Since I was forever busy calculating in the imagination, then overlapping to compensate for these annoying unreality blockers (people who kept serving up reality), I deprived myself of a crucial space. That is, understanding psychological energy and space by discerning lateral thinking is vital in the development of a young left-handed mind, especially if it is a highly sensitive one. Such methods were pretty much unheard of in my neck of woods.

Without slowing my mind down and allowing breathing room from these intense ‘thought-powered sensations’, I naturally veered even further from the conventional world.

I took the long road by taking shortcuts on nearly all occasions, having once thought that the convenience of a side-door wormhole from a number of loopholes was the best way to live my life and move forward, since I struggled where others found their flow. See, all I had to do was pull certain strings at the right time and use my knack in a workaround. Then of course, after more success I would naturally step it up. I found that nothing ever made me quite as happy as a secret bypass or two that others hadn’t known.

Unfortunately, my shady habits overwhelmed my life when I was young, and I now blame it on this sensitivity issue left unchecked, seconded and coupled by my environmental pressures (the conditioning that fuelled the fires of a young and ignorant mind).

I’m sure this is why I didn’t see anything of value through, neglecting everyday tasks and projects because they felt so monotonous or they were somewhat complicated to me. Or traditional steps never lead to anything stimulating enough. No one knew any better for me back then and wrote my behaviour off on other things, so my little devil inside was left with no option but to grow.

Although, I did have things partly right upstairs. The screws were loose but they were holding. You could say I was at least half bright or had my better moments. In the idea mode, there was never any problem with my will (the invisible whip), and I felt that I had everything perfectly planned. But when it came time to materialise and press these thoughts into the real world or thru that annoying in-the-way hoop we all know as ‘applying action’, I fizzled out. Often, I would find some bogus excuse and immediately lose my drive to achieve or perform.

I guess what I wanted most was to find a way to minimise each step within the task at hand, so I could get to my reward without any REAL hassle.

So, for a young man who had way too many unrealistic options, one idea springing up after the next from pressures by both myself AND others, the only real success that came was creating a child of chaos. Naturally, I veered off in life and found myself wound up in mischief, the full extent of which produced a trail of destruction across my timeline that followed.

And I speak in post-life tense now because I feel that layer has peeled away, which is liberating. Today, I’m simply reporting to you from beyond the old world in a previous life review. 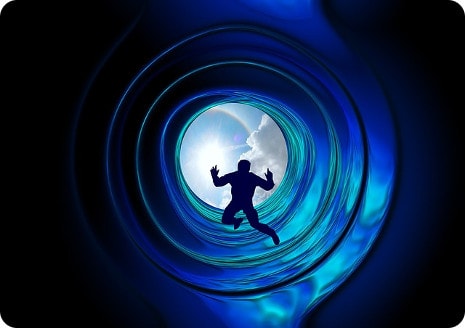 Having reached a point where something had to give for a real chance at REAL change in a new life, off I went to learn about this domination of ‘will’ as a bug inside my head. Over-willed or under-willed, etc. It is anything outside an optimal range.