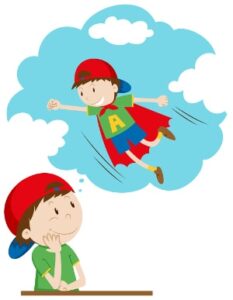 The hardest part about growing up with an odd mind was adapting to school. As the years progressed, I found it more and more difficult to hold my attention in nearly all subjects, and I’d drift off to another land.

Eventually, things got to the point where trying to teach me anything was useless, so forget it. Meanwhile, I was up in the clouds and in for a much harder lesson down the track.

If everyone were born with the exact same qualities, it would be a fairly dull place. Wouldn’t you agree?

Truth is, I don’t know much about genes, except surely they must always carry more than what meets the eye, no matter how far along the evolutionary line we humans travel. As something new gets found, something else is also closer to being found sooner or later.

Nowadays, I’m thinking less that our Universe has an edge or is somewhat contained by a barrier regardless of what Science has to say, which at the moment no one solidly knows or wants to admit. And that my High-Def Omnidirectional Screen can view an infinite potential or every possible arrangement of pixels on my monitor (matter/light/molecules/quarks) and more. Because suddenly, within those pixels are simply MORE smaller pixels as I keep looking beyond them. It seems my resolution won’t stop increasing, similar to the real world of ever-increasing technology. “To what end does this go?” I keep asking myself.

My display is huge as I take in North, South, East, West, and Up & Down, and I’m always in the middle.

Upon my observation, as I look and move in one direction, these pixels get bigger, while the ones to the side get smaller and soon drift away altogether. Also, some of the pixels get grouped together into self-sustaining objects and now they have a mind of their own, which means they can move on their own across my screen. Through a miracle known as Complex Life I am surrounded by moving lifeforms, known as people and animals, and they carry a concentration of pixels that end up influencing even more pixels, including lifeless objects, across my screen.

From an energy powered from beyond pixelation, perhaps coming out of a vortex, these forms exist and resonate softly, strongly or sharply, based on the previous pixels and episodes from their screens. Therefore, I have both stationary pixels and spark-powered moving pixels positioning themselves across my screen multiple times a day, which is how I see life currently.

Now, what do I do when a group of strong pixels or cluster of wormholes continues to get all up in my face and tells me to look in only one direction? Do I listen to them and follow their instruction? Or are most of them no more than bugs on my screen that I need to swat down and get them out of my way, but somehow without losing my ability to navigate freely throughout the display in what seems to be a never-ending movie? Some pixels are a little too interactive and controlling for my liking.

These are just a few of the many important questions travelling through my mind on any given day.

Another important question that comes to mind is how do all these pixels join together on the screen?

In regards to that alleged ‘inert’ stuff science calls ‘space’, that lays as background in between the bits and pieces contained inside our DNA (like the white behind these letters, or here’s an inverted view), I think it is loaded with the absolute goods in a field of great potential. Just as I also think that the space in between everything else in our shared surroundings holds significant value.

Perhaps that’s the best way to explain it when it comes to defining mind types. The difference between the General Mind and the Highly Sensitive Mind comes down to focus. While the majority of people focus on the words above the void, us Highly Sensitive folk are more intrigued by the void itself. And why wouldn’t we be? After all, to us the world looks like this: boring words on a far more intriguing background. Why focus on the boring non-colour, when a far more vibrant colour is there begging for attention? No matter how ravishing the words themselves may be, they still appear as dull, colourless squiggles on a vibrant, stunning field of infinite potential.

Still, sometimes the background is angry despite the wonderful, joyous words written on it. This dense canvas leads to bizarre behaviour that is hard to explain to those focused on the words alone. Or, even when the background isn’t angry, it can still sap us of our energy when trying to ignore the glaring shades of sensation when trying to focus on the words that everyone else is able to read so easily. This is what life feels like to a Highly Sensitive Mind, one that is tuned in to the infinite colours that everyone else may only perceive as useless white.

Today, I can’t help but find it fascinating as I watch existence uncover its greater essence; i.e., I watch the Scientist who identifies as some ‘thing’, ‘one’ or ‘body’, which is really none other than a sharp and curious vortex-driven spark that came from nothingness over billions of years of evolution. The Scientist ultimately identifies as an observer of information that expands outward to the surface of the human organism through these unique descriptions that we call ideas.

‘He’, ‘she’, ‘I’, ‘me’ then comes into light and naturally digs deeper into that ‘thing’, ‘one’ or ‘body’ to gain greater meaning about human existence. Or the body is contrasted against the outside environment, and vice versa, so that all the in-between gaps of information for the answers on life can be seen and worked out. They explain the bigger/close-up pixels against the smaller/distant ones and vice versa by seeing all the interactions for the sake of understanding the symmetry of life, thereby refining the screen we all live inside.

Highly Sensitive or not, I do believe we all share a common goal. Humans naturally want to make better predictions to get ahead of the game and increase the longevity and quality of the screen.