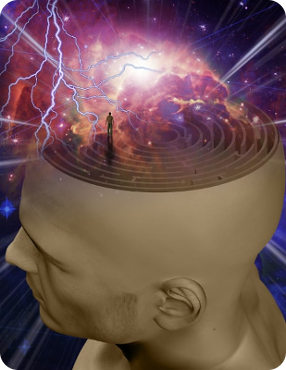 Time and Space usually refer to the metrics used by the inside world to measure the outside world. Or it is when a person observes life and builds physical relationships with outer objects, such as people, animals, lands, plants, and the like. But psychologically, I have an internal-only measure that covers my entire state of mind with emotions and feelings. The Innerverse has its own Time & Space or Spacetime Continuum that I endlessly travel within.

This upcoming section on both Time and Space of an invisible nature covers everything I understand so far in terms of internal symmetry. That is, the space experienced in my various moods, fragments or states, which I feel as either cramped in a cage from fear, or open and expanded from pleasure/joy. Otherwise, the space experienced falls in between the pair as I might only be experiencing a slight up or down at any moment.

As I’m experiencing a space, simultaneously, there is a time force responsible for each change in mental direction, fuelling my attention with past memories and future projections. A field of thoughts carries charged magnetic properties across from each pole which then converts into a space. As such, it feels a bit like magnetism (+/-) or gravity (pro/anti weighted psychological mass), with strong opposing forces constantly acting on one another. In any event, mental objects get pushed and pulled around to shape my current spatial state of mind to feel either cramped or open. It’s that plain and simple.

Within my internal realm, it’s all about a feeling towards or against a particular direction with either more or less space involved. That is, when I’m not existing near the neutral homeostatic state.

In one moment, my perception of time is stable and optimal. But during the next moment, when my thoughts compress into undesirable thinking, time on the clock dramatically slows down or feels longer than usual as I fiercely push away at a particular trajectory.

Time = My thoughts on the surface of my mind, thus it is my entire conscious psychological activity.

These powering properties within then convert into…

Space = My state of mind. Again, I either feel positively or negatively charged | floaty or weighted | cramped or spacious | a moment vs a month (or somewhere in between).

The Laws of My Inner Spacetime (My ‘In-Laws’)

To reiterate, my magnetic chatterbox mind is made up of both charged memories of yesterday (which are records of my experience, aka the past) AND any projections I formulate into tomorrow (which is memory processed with fresh content of my experience in order to appear as the future). So whenever I’m not feeling neutral or optimal, I’m either attracted to or repelling a particular direction in my life for the sake of experiencing or maintaining a level of space. Which then gets interpreted as the future. But really, everything gets processed in the ‘now’ or the present reality. Simply put, the mind has an amazing ability to make things appear to be happening in another period of time.

My thinking starts and continues in two ways:

In any case, I land at various areas of density or perceived enclosures — a measured space in which I am either freed or caged.

In total, an invisible mass of magnetic thinking tugs at my attention and takes me out of neutral. I try to stay minding my own business in the big Innerverse, but mental masses keep veering into an orbit around me and they take my attention!

When I enter into negative thinking, it comes from thoughts that produce negative sensations which give off a feeling of intense gravity because resistance makes me feel heavy. Yes, I understand that gravity is an attracting force (although a very weak one in the real world). But in this case heaviness is created by resistance from moving freely on the ground, not attraction. Thus, the more I push against a particular thought or direction, the heavier my inner reality becomes. Now, rather than keeping me afloat my thoughts and emotions begin to pull me into the dark depths below.

On the other hand, when I enter into pleasant thinking, it comes from thoughts that produce positive sensations which give off a gravity-free effect, and I feel floaty instead. This short-lived luxury of less weight or weightlessness means that I perceive no cage/enclosure, or very little ground.

Also, there is another type of space from beyond the dimension of thought called Actual Space; aka Spatial Energy, Crucial Space, the Great Silence. However, it’s a bit of a tricky topic to touch on just yet, so I’ll leave it till later when it will be easier to understand.

Everyone, please remain seated and keep your seatbelts fastened, as you may experience a little dizziness or light-headedness. Time & Space tends to feel a little warped upon your first visit!
« Previous
Next »