As I looked into society’s forward programming of ‘More Is More’, something amazing happened and my life changed in a most profound way.

Ever since I became aware of my unconventional wiring, paying special attention to the ‘higher idling’ from over-using my memory, my life changed in a very good way. But it wasn’t before countless attempts to integrate the conventional way of thinking, still believing I could simply move along the forward track as everyone else does.  “Surely, there is a better pill to take to solve all my problems” I kept telling myself. In the end, being aware of these layers working around the clock was the only policy that helped recondition my psyche as I began to watch myself react, focussing on both the real and unreal directions taking place.

For once, I genuinely wanted quality and not quantity to prevail, so I knew I had to drop everything previously taught in terms of diving into ‘learning something’ in order to move forward. If there was any REAL chance of long term benefits, I’d have to put the majority of my recollections aside as part of an unheard-of psychological diet, namely, Less Is More. In other words, I had to redefine the word ‘forward’ inside my psychology and not retain or recall the bulk of my unnecessary information previously stored. All I need is the necessary information, and perhaps a little escape every now and then, to act as a buffer or reset.

For most people, acquiring information is a way of moving forward intellectually. The more information they gain, the more they are able to it to put it to good use and learn even more further down the road. However, as a highly sensitive mind I realised that acquiring information also has the potential to destroy success from the inundation. In many cases, I remained fixated on the knowledge I had, overprocessing and overheating, leaving me little space for learning anything new. That’s when I truly knew that the only way to move forward was to let go of information and to not always process, keeping an open, uncluttered mind all throughout.

Essentially, I needed to treat every piece of knowledge as a stepping stone, creating a new path of forward thinking. Rather than collecting the stones, which would weigh me down, I would use them to get from one point to the next, leaving them very much where I found them. In this light, the only way to move forward is to leave everything behind. And thus, Backwards took on a whole new meaning. Today, my mind has in a sense gone into hibernation compared to yesterday, thereby saving significant energy. Subsequently, my understanding technique relied on all throughout life is now laid to rest. Thank God for that.

Furthermore, the once toxic love I had for overboard learning, along with my dislike for learning things I was opposed to, has gracefully dissolved like a cloud from my eyes, opening up a new life for me. 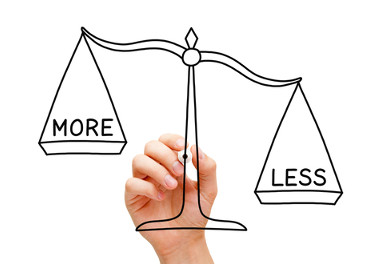