My understanding of truth in today’s world is that it is elusive in nature and not fixed on a particular idea. This energy of truth always moves from one piece of information to another over the course of events that uncovers even more revelations. You see, in my world, the truth never stays the same, or its effect, which is a heightened sense of knowing something unique for the first time, moves onto something next in line once this sensory value has significantly reduced. I could also call the truth ‘The Truth Train’ as it is always picking up and dropping off different ideas at each stop of my life.

But to understand truth at its very roots, I must first take a step back from conventional wisdom and see what a fact is since this is what is meant to reinforce the truth.

The Nature of a Fact

Facts are a credible source of information of the past that are set in stone. They are an accurate impression, representation, or trace of a historical event. However, what I have noticed nowadays is that a recollection of these events can be interpreted differently, either from the perspective of being stuck in old-conjectured light, or from that of a new light that has just opened up to me. In which case, I get a clearer view of an impression that I hadn’t seen before and I’m in closer contact with life because of it. Ideally, I want to minimise any distortion between the actual impression (a record of reality) and the observer of life (me with optimal filtering) in order to gain greater insight.

Also, some of us play games by adding optics to distort a fact. Or else we deny, deflect, and suppress the relative ‘new light’ knowledge from getting thru and shifting one’s perspective on an event. Actually, it’s a common practice that I’ve now coined ‘professional conjecture’ which has plagued humanity since the beginning. Although in today’s world I see it as being much more crafted and harder to detect than usual. Despite this ever-improving ability to manipulate facts, giving rise to ‘alternative facts’, the nature of a fact remains unchanged. Simply put, a fact is the concrete record of a physical event or phenomenon, one that is provable, demonstrable and in many cases, even tangible.

Now let’s get to the truth of the matter in Today’s world which seems to be increasingly regardless of fact.

The Nature of Truth

When a piece of knowledge is worshipped, cherished, or deemed sacred or important for any reason, regardless of whether it bears fact or not, it has a tendency to transform into belief and truth. And within this sense of truth now comes another sense ─ that of territory, which gives a strong feeling of connection to others who share space along the same line of thinking. Plus, if I look at all the major truths that I have held onto in my life, I can see how they immediately became a part of my identity. That is, the truth was only the truth until it ran out of emotional fuel, and I had to grab hold of another one to replace it. So the truth, in ever-changing form, was always by my side.

With the power of the truth in my voice and eyes, my tribe and I can fend off any other ‘inferior untrue ways’. Even if they bear that annoying thing called fact that could devastate our world.

Admittedly, there have been many factual and non-factual blocks of information in my life that had once gained and then lost the truth title. Why? It was because I found something else that stood out stronger. The energy immediately transferred over to another set of ideas since I had been primed to follow the emotion trail, if that makes sense.

Let me explain. During each transfer of the truth tag from one thing to another, I felt my empowering sensations lose grip, only to then feel them grip onto something else which became newly empowered. Even though the words, images, symbols, and objects had changed their content or became completely rearranged with emotional input, the feeling of truth was absolutely the same every time.

Also, a byproduct in the form of a newly obsolete boring truth, or an outdated piece of knowledge, started piling up. Sure, some of these things may still be true in the technical sense, but they are now meaningless truths. They hold little emotional or sensory value.

As I continue to unravel my conjectured world, I see that many people’s truths collide from angle to angle, evasion to persuasion. It really is a non-stop information war out there. Therefore, my truth is never fixed on any single piece of knowledge. It’s not found within the set-in-stone fact. Rather, if anything, I observe life through a network of filters primed to locate even more sensory value, thus keeping my truth at a premium.

The only solid fact of the truth that I know is that it’s based on my perception, which delivers enhanced emotions and feelings about what supposedly happened in reality, and what should happen in the future.

Whose Truth is strongest?

Opposition claiming a lie and reclaiming the truth: You can’t see oxygen either, but it exists and you need it to live.

Me now devaluing that response and getting back a good part of my truth: Science can accurately detect and measure oxygen. Therefore, I can predict areas that have more or less oxygen which keeps me safe in life. Science compensates for what I can’t see and significantly increases my survival rate. However, science has not yet been able to detect or measure God.

And on and on in perpetual war we go…

Perception is always inflaming my truth gland as I live and learn in my life. As new experiences and fresh content give insight, I feel my energy shift from one fact or piece of information to another. It moves from one sentence to another, one paragraph to another, because truth is simply dynamic in nature.

In fact, the only truth about the truth is the way that I feel about it. Are you feeling it too? If someone throws new light my way and it makes me feel like crap because of the way I’m primed, I’ll reject it since I’m attached to my old light. On the other hand, if it makes me feel good, I’ll join your tribe and hold onto our truth for as long as I can, thereby making it my own. 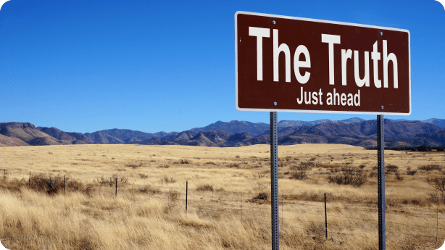